In addition to the extensive reseach completed and underway with TheImploder technology, we present consistent international general research showing that in general MAGNETIC WATER TREATMENT- for agriculture and for home use (even descaling and more)- is WIDELY PROVEN TO BE EFFECTIVE.

Reminder- the international research is clear: magnetic water treatment DOES work. Our SuperImploder- at 3000 gauss! per magnet - over the large surface area of 8 coherently directed magnets conjugating right into the water flow- IS THE WORLDS MOST POWERFUL MAGNETIC WATER TREATMENT DEVICE.

"The analysis of the data collected during the study suggests that the effects of magnetic treatment varied with plant type and the type of irrigation water used, and there were statistically significant increases in plant yield and water productivity (kg of fresh or dry produce per kL of water used). 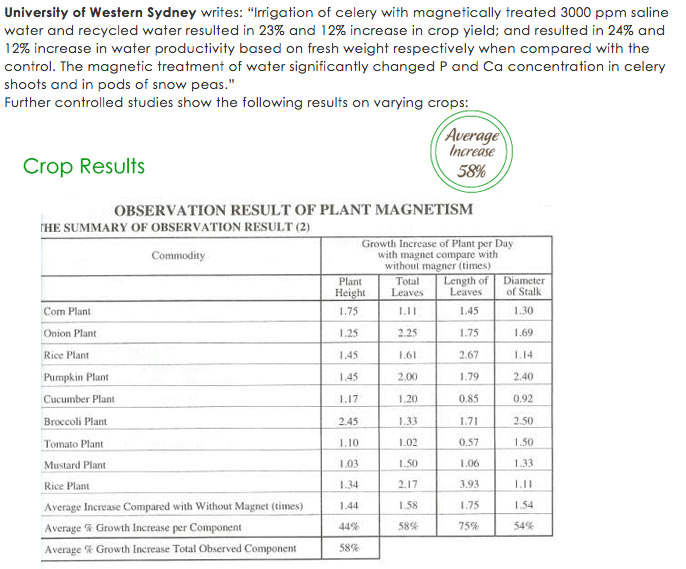 "Magnetised water - in TodayTonight (Australia). The use of magnetic water in agriculture to increase harvest and save up to 25% water. Live testimonials by biggest Australian farmers"

Experimental Evidence for Effects of Magnetic Fields on Moving Water

by Dr. Klaus J. Kronenberg, The full article appeared in the 1984 Institute of Electric and Electronic Engineers (IEEE) Conference transactions: IEEE Transactions on Magnetics, Vol. Mag-21, No. 5, September 1985, pages 2059-2061. This article corresponds to the presentation by Dr. Kronenberg at the IEEE's International Conference on Magnetism in April 1985 in St. Paul, Minnesota. Only the abstract is included here.

Abstract Observable changes of water by magnetic fields have been investigated in an attempt to contribute to the knowledge of the structure of liquid water. The crystallization mode of the water's mineral content was found to change from a dendritic, substrate-bound solidification habit to the form of separate disc-shaped crystals after the water had moved through a number of magnetic fields. The former scarcity of crystallization nucleii in the water had been turned into an abundance of nucleation centers in the water. The reduction of the number of the substrate-bound crystals has been used as a quantitative measure of the magnetic effect. A mechanism is suggested assuming that resonance between the time sequence of the magnetic fields and the internal vibratory frequency of the water complexes results in the fracture of some of the complexes. Thereby, the formerly encased foreign particles are released and provide the nucleii for the formation of disc-shaped crystals throughout the volume of the water. Further studies are urged in view of the staggering potential benefits for many water users, such as prevention of hard lime scale build-up, increased effectivity of chemical additions to water for softening, fertilizing, feeding, and cleaning purposes.